A Successful Kickstarter Campaign - Or Was It?

Hey! How about subscribing to my blog via RSS feed or email? It's quick and easy and you'll never miss a single post. Thanks! 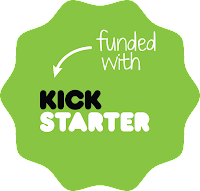 I had a friend ask me about my thoughts on my Successful Kickstarter Campaign. He is planning on launching a campaign this summer and wanted to "pick my brain" so to speak. This is a huge can of worms and I don't know why I haven't blogged about it before. Whether or not you pledged to my Kickstarter campaign, this post is not about you. These are just my observations and over-reactions. If you contributed, whatever the amount, I'm so grateful. If you did not contribute, for whatever reason, I'm not hurt.

From the outside looking in, this project looked like a success. I was able to raise $585 over my goal of $3,500. I was able to make a CD that I'm pleased with. From the inside, however, the project felt like a failure. This has nothing to do with money. I'd like to share with you some of the things I wrestled with over the 30-day campaign as well as the successes and, finally, some advice.

I am about to get very honest.

Given the opportunity, I would not do another Kickstarter. It was the hardest month I can remember. For someone who struggles with insecurity as I do, it was awful. I lied on one of the videos and said that it had been fun. It was not fun.

Several times (including the first day), I thought of quitting. Looking back, I'm glad the project got done but I don't know if it was worth all the emotional junk it brought up. I was pretty much a nervous wreck until the closing bell, even after I knew the project would be funded. I was in a panic for the entire month, then I was a wreck about actually completing the project.

This project brought up my idolatrous need for validation from others. I knew that's what it was, but I just could not shake this feeling that my music, my ministry, and my own worth as a person would be negatively affected if my campaign did not get funded. That's totally a lie.

There you have it! I've confessed some sins and shared some information. I hope this is helpful to you as you think of launching a fundraising campaign of any kind.  I wish you the best.

Over to you. What makes you decide to support or not support a campaign? I had 96 "likers" but only 34 backers. If you "Facebook Liked" my campaign but did not pledge financial support, would you be willing to leave an anonymous comment and let me know why? Be honest. If it is helpful, I'll post it for others. If it is hurtful, I'll assume it was someone pranking me. :)

If you thought this post was helpful, consider sharing it with your social network via the sharing icons below. I would really appreciate it! Thank you.
Tweet