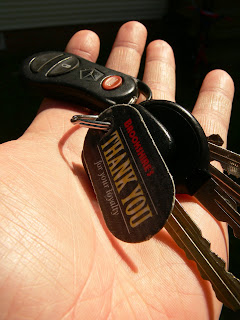 I have a "love-hate" relationship with my keys. On this ring I have:
I don't know why I just gave you an inventory of my key ring. It seemed relevant at the time. Anyway, several months ago, I couldn't find my keys. I looked everywhere for them and interrogated everyone in my house. Melissa was a "person of interest" in the disappearance as she was the last one to have them before they went missing. I gave her a pretty hard time about it even in the presence of my Mom, who was visiting at the time (that will be important later). I went and had a duplicate set of keys made and not more than a week later as I was cleaning out my bedside dresser/nightstand and, lo and behold, my keys were in the bottom drawer. It seems as though my firstborn decided to 'put them away' for me. I was relieved to have them back, Melissa was irritated that I had given her such a hard time, and Garrett never admitted any guilt.

The story continues. I failed to publicly apologize to Melissa and tell my Mom where I found the keys and that Melissa was off the hook. Now if I believed in karma, I would say that it decided to take its revenge because just a few days after finding my keys, I left them on top of the van and Melissa drove off to Tyler (about 35 minutes away) without noticing. I remembered about 15 minutes after she left and called her. She was on the highway in a construction zone and said that she had heard some scratching on the top of the van. "Those were my keys," I admitted. She laughed and said that it served me right for treating her so "badly". I went out to where she said that she thought the keys might have fallen off and couldn't find them. My sweet wife also went out and walked up and down the highway looking for them and even asked some of the road workers of they had seen them. They were really gone this time...or were they?

A couple of weeks later I got a call from the manager at Brookshire's grocery store in Lindale, a town about 15 minutes from here on the way to Tyler. Someone had found my keys and turned them in to the store there. See? Now I know why I inventoried the key ring for you. The Brookshire's Thank You card was a key piece of the story. Melissa stopped by on her way home one day and picked them up for me and all was right with the world...until yesterday.

I was heading out to take Garrett to preschool and couldn't find my keys. I remembered that we usually keep a valet key in the lock box in the van. I prayed that (1) the van was unlocked, and (2) the lock box was unlocked. Both of those prayers were answered. Inside the lockbox, I found the spare set of keys that I had made several paragraphs ago. I got Garrett to school and back but still no sign of the keys. Then today, something strange happened. We were dong some morning chores (laundry, cleaning up after breakfast, etc) and the van's panic horn started blowing for no reason. I looked for the kids and neither of them had the keys. Melissa's keys were safely in her purse, so the only reasonable explanation for the van to panic was that my panic button had been pressed. Hope was alive, or so I thought. I still couldn't find the keys.

Later, I was out in my office working on our taxes (not important, just filler) and Melissa came out shaking the water out of my set of keys and trying to get the remote to work. Apparently, I had left them in the pocket of a pair of shorts and they went through the washing machine. They were really clean, but the remote control didn't work. Did you catch that? The remote control didn't work. That was until I completely dismantled it, dried off all of the circuitry and batteries and put it back together and, beep beep beep, it locked and unlocked the van just like before. Good as new! Except better because now it is spring fresh, too!

So, all that to say that my keys are safely in my possession...for now.
Posted by Toby at 3:06 PM